It’s the only Bible passage (not featured in Pulp Fiction) that I’ve ever bothered to memorize.

Each spring, those words, recited by the immortal Ernie Harwell, would usher in a new spring. With it, a new beginning welcomed a renewed hope and enthusiasm about what was to come. Growing up in Michigan, the welcoming of spring meant that grey skies would soon turn blue and that the sun would be there to greet us each morning, and we would be able to see it off to bed each night. And, most importantly to some, it meant the arrival of Opening Day.

For me, baseball is much more than a game. It’s family. It’s history. It’s the common thread that connects me to the past. It’s the comforting memories of warm summer nights spent on that porch, listening to baseball, drinking pitchers of my grandmother’s lemonade, and watching the sun dip below the tree line and the sky morph into a watercolor vista of reds, oranges, and yellows. It’s afternoons playing outside with the other kids in my neighborhood, playing pick-up games on a makeshift diamond that had been mowed into the massive field behind our houses. It’s sitting at my grandfather’s grave every Sunday for years after he had died, reading him the box scores from the week’s games or complaining about some boneheaded trade.

Baseball, in this day and age, is arguably more American than America itself. It is the shining example of American idealism and of what America wants America to be: a melting pot of cultures and personalities and philosophies from across the globe, all competing with and against each other to lay their claim to the admittedly pretentious title of “world champion.” It always has its eyes towards the future, while paying reverence to its past. It’s a game where anyone can have their moment in the sun, and everyone gets their crack at it.

Finally, baseball is quite simply the greatest game ever invented. It’s a game that can be played anywhere, from cornfields to abandoned parking lots to billion-dollar stadiums. Its basic rules are simple enough for anyone to grasp, while its intricacies can demand chess-level strategy and understanding. Its design and dimensions are perfect. If you were to move first base by a single foot, or lower the pitcher’s mound by even one inch, you disrupt the delicate balance that makes the whole thing work.

It’s a game that evolves as it is played. Yes, to the uninitiated and the uninterested it may seem “boring,” but the game changes with each inning, each at-bat, and each pitch. From the moment that the batter steps up to the plate, he and the pitcher are engaged in a battle of wits. The batter may know that this pitcher tends to favor throwing a belt-high fastball when they fall behind in the count. The pitcher, likewise, may know that this particular batter likes to shorten their swing when they have two strikes against them, so they’ll “waste” a pitch by throwing in the dirt. The batter may take the bait and swing, or they may practice discipline and keep the bat on their shoulder. The batter, a seasoned veteran of ten or so years, may believe that he has this pitcher figured out and digs their feet in, expecting another fastball. The pitcher, meanwhile, knows that this is what the batter will do, and rather than send them another fastball they’ll throw a big, bending curveball that buckles the batter’s knees and sends them back to the dugout with their head hung low.

Interview with “Behind the Screen”

So… You’re Working From Home 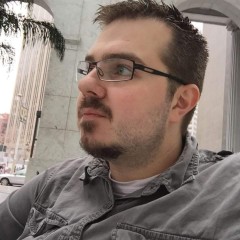 James B. Jones is a certified baseball fanatic and "Disnerd" who sometimes moonlights as a professional writer and video game designer.